It alway struck me as a bit strange. When I moved to the UK it didn't feel familar at all.

You could swim with dolphins with Black Cat Cruises! Just share your best pic of Banks Peninsula at http://bit.ly/blackcatcruises

I did that and it was very cool...

Even though Paris Hilton wasn't there when I did it.
Top

She does look a bit like paris now that you mention it.

The gap filler projects have been attracting attention.


Gap Filler has been consulted on how to revitalise urban space by authorities, academics and communities in Auckland, Melbourne and Western Australia, with more cities set to learn from the Christchurch experience in coming months.

"They look at what is happening in Christchurch with envy. They want some," Gap Filler Trust chair Ryan Reynolds said. "It's surprising what a hunger there is for this." There's a perception that "life in Christchurch is meaningful . . . in a way that it's not in a normally functioning city", he said.

Gap Filler is a "creative urban regeneration initiative that temporarily activates vacant sites within Christchurch with cool and creative projects, to make for a more interesting and vibrant city", according to its website.

I think most of us have felt like this at times.

I have been living just out of the Four Avenues for nearly 20 years since an argument with my parents got me kicked out of home at 17.

Oh, how you embraced me Christchurch. Wandering through Barbadoes street cemetery and along the riverbank to the CBD on a morning not unlike this one, spending hours at Toffs Clothing store on Gloucester Street, hours buying books in the bookshops on Manchester Street, pretending to be cool in the old C1 cafe. Playing pool in Cuetime.

Mother Nature shook you Christchurch, destroyed you. Turned you into something one of my friends described as a zombie apocalypse. She's right though - great place for a movie set. Apart from the obvious danger.

I was determined to love you Christchurch. I wanted to be there for you in your time of need, I wanted to tell you everything was alright.

I worked hard, everyday, through no power and water for several weeks, through lost friends, lost family, lost businesses. It's ok, I said. I'm going to be there for you.

The places I loved are gone. It's hard for me to see what you could be like through the miles of red tape, the people suffering, the brokenness of the people and things I love.

I know this isn't your fault - but you will bear the brunt of it. People are trying Christchurch, we are really trying to love this city that has been our home, but it's been buried in a sea of bureaucracy, pain, loss, and a sense of hopelessness. We are fighting a battle we are quickly running out of strength to fight.

I'm bored with you Christchurch. You have nothing for me to do. There are only so many overcrowded bars and cafes I can go to.

I miss your heart - to others it was dying before, but it was always a comfort to me. New Years at the Dux. Dancing in the spotlights outside the duty free on Colombo Street while waiting for a taxi. Huge queues at lunchtime for souvlaki on Armagh Street.

I've embraced change, I've shown off my city to visitors, I've visited places I haven't been since I was a child. I've reconnected with family, taken up a few new hobbies, made new friends.

It hurts me to see you like this. It hurts me to watch weeds grow all over you for the last four years. It hurts when people say it's a hole and don't bother visiting. It's because I love you so much.

It's sad that the final straw is because my work has moved to your bigger, noisier cousin Auckland and now I have no job. I don't want to leave you Christchurch, I really don't. But I need to think about me.

You won't be alone old friend. You have hundreds of people arriving, like Humpty Dumpty's army, to put you back together again.

They love it here - the potential, and the space to raise their kids, the smaller commutes, and the sense of community. I love it too, but I can't stay. It's too much and I've fought too long.

For me my time has come to go, move on, live somewhere that isn't broken and where my shocks don't need replacing. I'll miss you, and I hope we can be together again one day.

The coffee house has taken over the villa next door and become the Twin Villas. New St Elmos courts under construction next to it.

Taken today. Looking down High street towards the square. Taken today. Corner of High, manchester and Litchfield almost dead centre of the shot. Would you have recognised it?

This used to be a dream home. Here's caption that went with it.

The old library is coming down. While new office buildings are under constrution in the background (yay!)

We're not called the garden city for nothing.

Rangiora, north of the city, also faced many damages from the earthquakes. But also many buildings have also fallen from the new earthquake building codes in the area. This heritage building on High Street is one of those with the facade being kept and a new building being planned behind it.
Once the verandah is checked you should be able to walk right past it like this.

Ha ha. Quite bizarre to see that my wife has made it on to PR via this thread!!

Well, is it the dude playing putt putt?
Top

Well, is it the dude playing putt putt?

But seriously, we have to know now!

If a guy was to move to Christchurch with a couple of starting high school girls any recommendations as to where to live?
Top

The South Island beer Festival from Feb this year at Ilam House. Was a lovely 34°C day with 30 local brews available. Much more civilised than the big festival in hagley park. I'm actually in one of these shots. But too small to work out unless you knew it was me.

High, Hereford & Colombo Street corner - once referred to as the Bottle Neck! Leighs Construction are starting to rebuild on the Triangle Centre site

Hereford/Colombo Street Corner. You may remember this as the site where TSB Bank stood at the time of the earthquake. 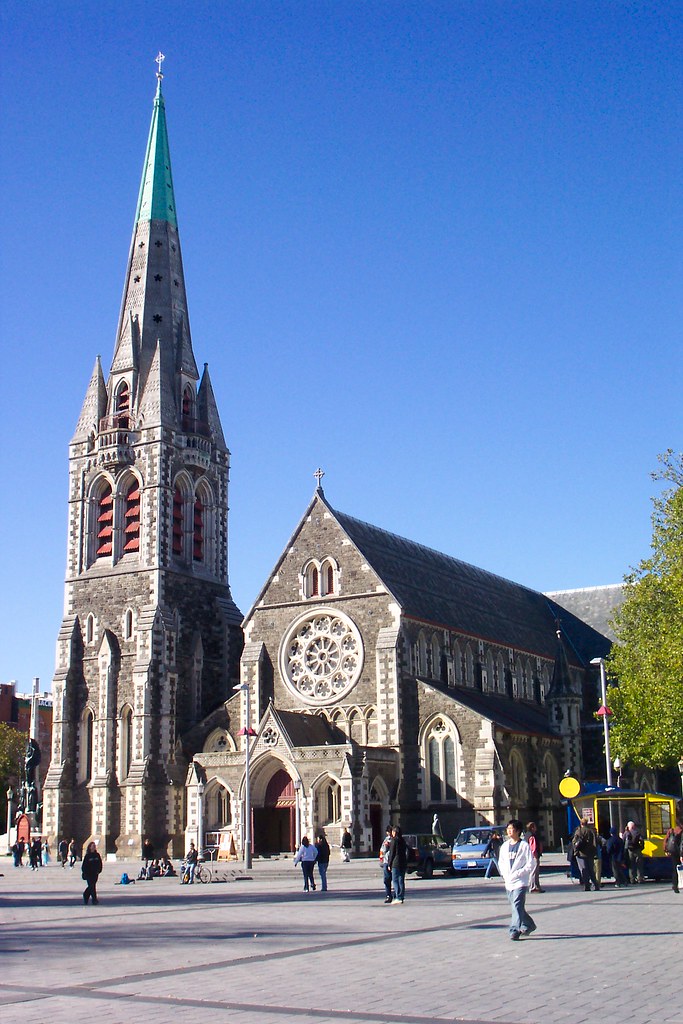 I was never a big fan of the cathedral, but I have to admit it's nice to see the old girl in all her glory.

There is still no word on what they are going to do with it. These guys are campaigning to save it.

And I've seen there billboards around the city, plus adds in the paper. Photo's were taken in June this year.

Hoptoberfest is nearly upon us

Being held at the Volstead. 60 beers to try. Mmmmmmmmmmm, beeeeer....

Hoptoberfest is nearly upon us

Being held at the Volstead. 60 beers to try. Mmmmmmmmmmm, beeeeer....

You have the beers, I'll have the lass
Top

She's a very nice girl. All the staff are nice to be fair.

And as for the beer. I rarely get past the 20 plus beers on tap, but I should make the effort to try some of those in the cabinet.

The ones at our cabal were all really great
Top

The ones at our cabal were all really great

There's alot of it about.

What's the latest on any potential permanent stadium?
Top

The ones at our cabal were all really great

There's alot of it about.

Back to the pics. These don't look too bad for oxidation ponds.