Had to happen
Top

Well I guess Kearns, Alan Jones and Murdoch will make it all right.
Top

Board asked her to
Top

I believe she made the call
Top

are you watching 7.30, thats what was said
Top

are you watching 7.30, thats what was said

You know what controlling the message mean
Top

are you watching 7.30, thats what was said

You know what controlling the message mean

then it would be the other way round, why would she relinquish the role.
Ill repeat, she asked to the board, do you believe the game is better off without me, they said..yes, she made the call? you can look at it that way if you choose
Top

No, not coronavirus. Fell on her sword. Amazed she could see it.
Top

And you can fade into the sunset anytime you like, you tedious NSW fúck
Top

I never trusted her, all that black. Like Eddie Jones carrying a wallaby to England games.
Top

This is f**king disastrous for rugby in Australia.
Top

On Thursday evening she telephoned interim chairman Paul McLean to hand in her resignation. It brought to an end her almost two-and-a-half year stint as RA's chief executive.

She said in a statement provided to the ABC: "I love rugby on every level and I will always love the code and the people I have had the honour of working with since I took this role. I made it clear to the board that I would stand up and take the flack and do everything possible to serve everyone’s best interests.

"In the last couple of hours, it has been made clear to me that the board believes my no longer being CEO would help give them the clear air they believe they need. The game is bigger than any one individual - so this evening I told the Chair that I would resign from the role.


"I will do whatever is needed to ensure an orderly handover. I wish the code and everyone who loves rugby nothing but the best and I would like to thank the people I work with and the broader rugby community for their enormous support."

Clouds were gathering ominously above Castle's Pyrmont apartment on Thursday as speculation mounted she had less than a week left in the top job.

She was a late scratching from a crucial meeting with the state chairmen to go over RA's 2019 balance sheet and cash position.

Less than 24 hours earlier, Castle's fellow directors excluded her from a board conference call on Wednesday night. She was unaware the meeting had taken place.

Castle's withdrawal from Thursday's balance sheet meeting was unexpected and unexplained to those present on the call, with chief financial officer Simon Rabbitt and new director Peter Wiggs left to steer the talks, which were the first opportunity for the Super Rugby chairs to size up RA's full financial picture.


The developments came as a board source told the Herald Castle would not see out next week at the helm of the business after losing the confidence of the board.

The 48-year-old was not aware of any threat to her job when contacted through a spokesman. Indeed, she was scheduled to appear on the ABC's 7.30 current affairs program on Thursday night, recording an interview with presenter Leigh Sales earlier in the day.

The biggest question the RA board will have to answer is who will replace her.

There do not appear to be any internal candidates of sufficient experience or standing to fill the role, leaving the likely scenario that a director would be asked to step up in an interim capacity. Wiggs and World Cup-winning Wallaby Daniel Herbert would be the most qualified.


Wiggs runs private equity firm Archer Capital and is chair of Supercars after Archer bought the business for a reported $180 million from SEL in 2011. It is now reportedly worth about half its purchase price and is in the middle of difficult broadcast negotiations to renew its deal with Fox Sports and Ten.

Herbert is highly regarded in the game and is the most experienced sports administrator on the board, having served as Queensland Rugby Union executive general manager and chief commercial officer, among other roles, over an eight-year period. He is now chief executive officer of strata management firm SSKB.

Outside the current board and administration, both Phil Kearns and Nick Farr-Jones have been touted as would-be successors, although the board would come in for fierce criticism if it made a permanent appointment without following a formal and independent recruitment process.

Farr-Jones told the Herald's CBD column on Wednesday that he "would like the challenge, but I really like what I'm doing at the moment".


His involvement in a funding scandal while chairman of the NSW Rugby Union would likely come up for discussion. Farr-Jones used $56,000 of NSWRU money earmarked for Indigenous education to dole out a secret personal loan to former Wallaby Jim Williams in 2015. It was not paid back until some six months later. A federal government investigation cleared the World Cup-winning former captain of misusing federal funds.

Kearns lost out to Castle when both applied to replace Pulver in 2017. He has been coy on whether he would throw his hat in the ring again, answering a direct question on the matter from Fox Sports this week with references to his contribution to the grassroots.


Farr-Jones and Kearns led the charge this week on the explosive letter signed by 10 Wallabies captains and sent to interim chair Paul McLean. The letter calls for the current administration to step aside and for a special general meeting of the RA members to be convened by the end of the month.

Farr-Jones told CBD he met with McLean on Thursday. "I had good discussions with Paul McLean today and we're trying to work amicably to achieve the required outcome for the benefit of the game," he said.
Last edited by RandomNavigat0r on Thu Apr 23, 2020 11:08 am, edited 1 time in total.
Top

Best thing to happen to the game since Clynes departure.

I think the goal of tying community rugby to any future TV deal was a good one for grassroots rugby.

That's all I'll say as I don't know much about Oz rugby politics.
Top

Good luck to her. She's better off no working with the bunch of clowns involved in Aust rugby. From Izzy to Alan Jones to Cheika to Beale etc. What idiots.
Top

CrazyIslander wrote:Good luck to her. She's better off no working with the bunch of clowns involved in Aust rugby. From Izzy to Alan Jones to Cheika to Beale etc. What idiots.

Yeah, Beale was extremely rude to someone. And once punched a Welshman in a bus.
Top

Best thing to happen to the game since Clynes departure.

Yeah would be like Murray Mexted taking over the NZRU. Dribbler.
Top

There's only one person for the job. 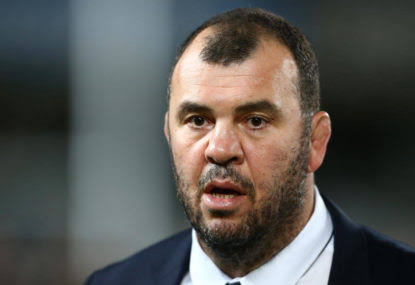 I hope you didn’t over exhaust yourself coming up with that?
Top

I mean, she has alopecia.
Top

Stookey is a fine director/board chairman type of guy. Very solid bloke but for a CEO you'd be looking at someone younger.

But it's a mistake to think the Western Force are looking to get back into Super Rugby - because, as it is now, that comp is a basket case.

Short of a full reset of RAs branch of pro rugby, the Force are better off staying out.
Top

Also, Andy Foode is the obvious 10

Sorry Grievous I didn't see your thread when I started another one.
Top

The first of many losses.
Top

He would be my pick too. Geoff Stooke should put himself forward
Top

6.Jones wrote:Sorry Grievous I didn't see your thread when I started another one.

Incestous rugby is in this country and never learns. Kearns, Eales and Pulver all live within 100m of each other in Burrawong Ave. O'Neill is the odd one out from Everview St.

Wiggs' private equity firm, Archer Capital, is so clever they have lost nearly 50% on their V8 Supercars investment.
Top

CrazyIslander wrote:Good luck to her. She's better off no working with the bunch of clowns involved in Aust rugby. From Izzy to Alan Jones to Cheika to Beale etc. What idiots.

Yeah, Beale was extremely rude to someone. And once punched a Welshman in a bus.


His (Beale) rap sheet would need a floppy disk at least if it included all of his shenanigans, rather than just the one's that got picked up by the press. He's been protected more than anyone during his career, and sadly one of his 'unprofessional' incidents resulted in the loss of Link to Aus rugby, just when his changes were kicking in and paying fruit.
Top