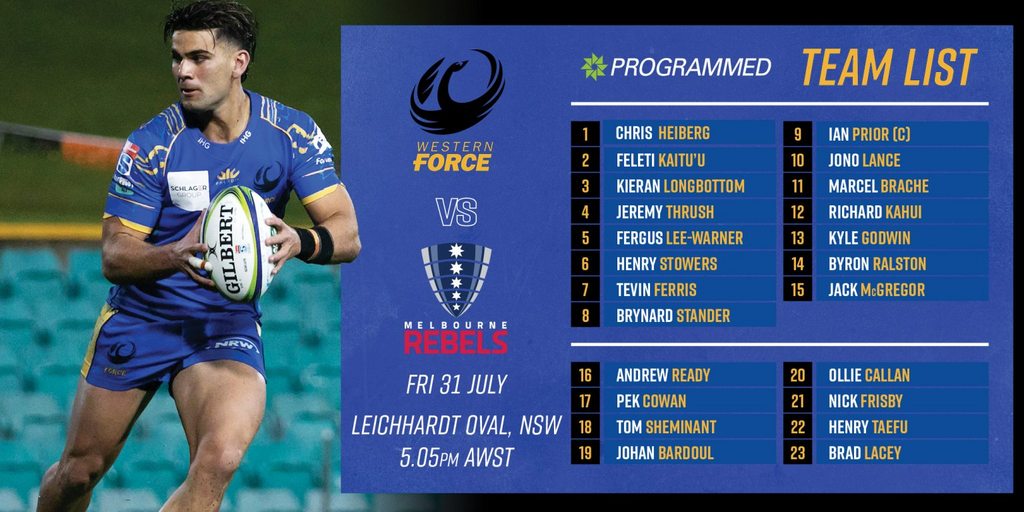 I need guidance on who to support.
Top

shanky wrote:Who are the battlers and who are the plague?

I need guidance on who to support.

Battlers had the spare change fleeced out of their bags in the shed while warming up.
Top

Normally I'd go for the underdog, but in this case, there's two of them
Top

Go Rebels! Should be able to put away the plucky bunch o' battlers from the west.

Is anyone interested in this little side market of mine?

In Which Minute will Kahui be Broken?

How much for in the warm up?
Top

I'm prepared to refund the punters in the likely event that occurs.
Top

Dreamboat XV it is

Dreamboat XV it is

Look, he's no Jarrad Butler - however, he is here rather than oop north:

Looking forward to this one. Rebels should never have been allowed to continue (fu'ck Clyne)

Heres a nice little article on the match..

It has taken 1121 days for the Super Rugby grudge match Western Force’s Sea of Blue fans have been waiting for — the chance to inflict some misery on Melbourne Rebels.

The Rebels are huge favourites heading into Friday’s clash at Leichhardt Oval, having spent the last three years in Super Rugby. But if games are won on passion and emotion the Force can buck the odds.

The Force won the last Super clash 31-22 in July 2017 only for Rugby Australia to bring down their guillotine two months later despite a $70 million offer from billionaire Andrew Forrest to keep the club alive.

The Rebels swept up Force players — there are eight in the match day squad — and staff including current coach Dave Wessels as Forrest began plotting a Force comeback in Global Rapid Rugby.

Now, with both GRR and the old edition of Super Rugby cancelled by the coronavirus crisis, the clubs come face to face in the new Australian version of the Super competition.

Force coach Tim Sampson, who has rebuilt the side understands the depth of fan feeling but has urged his players to keep emotions under wraps.

“Understandably, what the fans and members went through, they have every right to feel this way,” Sampson said.

“It means a lot to people back home. For our fans, we’ve got to get a win.

Former All Blacks second-rower Jeremy Thrush has played in plenty of crunch matches in his career.

“We all know the history. It is big for our club. We touched on that and put it to one side. It will probably resurface a little bit before the game,” Thrush said.

“There’s always emotion. There’s been emotion for the last three games coming back into this competition.”

Sampson has boosted his centre firepower with 2011 World Cup-winning All Black Richard Kahui and former Force and Wallaby Kyle Godwin starting together for the first time.

“We want to see something different through the midfield. They area are a bit of a calming influence,” Sampson said.

“Playing behind our forward pack, which has been impressive, hopefully they can get a lot more ball in their hands and open this game up.

“Richard can play quite direct with ball in hand, but he’s got some lovely skills, soft hands, his vision is really good in terms of putting guys away.

“Kyle outside him is a big strong body and hits really good lines but he’s got lovely hands as well.”

Could be interesting with a bit of spite. I'll go Force as I have actually attended one of their matches before. Rebels should be made to wear masks.
Top

Good to see some nice, objective journalism there.

Sure the Force were hard done by but it's not like the Rebels have been basket cases.

Some big wins, most notably over the Crusaders in Melbourne previously, and Highlanders in Dunedin this year.

I'm playing a violin concerto right now for the Force's interstate players who then went interstate to play for the Rebels. The tears are genuine.
Top

kiwinoz wrote:Could be interesting with a bit of spite. I'll go Force as I have actually attended one of their matches before. Rebels should be made to wear masks.

Sure the Force were hard done by but it's not like the Rebels have been basket cases.

Some big wins, most notably over the Crusaders in Melbourne previously, and Highlanders in Dunedin this year.

I'm playing a violin concerto right now for the Force's interstate players who then went interstate to play for the Rebels. The tears are genuine.

When the Rebels took the entire force team, and coach, its a bit hard not to be alot better than you were previously.

You seem to be missing a part of your brain where this doesnt seem to compute. You seem to live in this world where the Rebels magically became good enough to stay in super rugby without realising why that actually is. If your brain worked, and it clearly says in the article, the rebels were beaten by the Force during their last match in super rugby, the Force also anal gaped the Tahs. Now if that Force had stayed together they were good to top the Aussie conference in 2018, and possibly make a semi final with home ground advantage. How about you either stick to the facts, or go hang out in one of NZL threads where you can tell us all how awesome it is to be playing rhe same 4 sides a hundred times a year..
Top

I reckon the Force are a real chance. The Rebels tight 5, with the exception of Philip (who is on the bench) and Fa'amausili (also on the bench) are powder puff. Force should win the collisions and get regular front foot ball.
Rebels backline is much better (although that 9, 10, 12, 13 is pretty amazing, and if Ralston gets some ball he is pretty exciting). Rebels backrow looks bloody good and balanced, so there could be some issues at ruck time.

Was going to go to this...but didn't
Good conditions for rugby
Top

What happened to Ferris? I missed it
Top

shanky wrote:What happened to Ferris? I missed it

I logged in to see him on the ground. Hope he is OK
Top

Get the young bloke on
Top

Get in there!
Top

Get the young bloke on

He is dire.
Top

He's been alright. Force the much better team at the moment.
Top

That blindside situation is a halfback responsibility. Poor effort
Top

Wow. Winger butchered that try. That was CFS-grade butchery
Top

Naisarani is a fcking unit.

Hodge"Chicken Legs" puts it over
Top

Well, Dreamboat lasted the half, Scoop.

He’s got this ref-bingo thing going on...
Top

That was a soft penalty. TH went down

Phillip comes on. Immediate go-forward for the pack
Top

Rebels got their forwards working in pods, they should of scored their, matter of time
Top
Post Reply
96 posts